The Abu Dhabi Grand Prix is at the end of a 19 race long season. It’s been another tough year for the circus and all it’s performers. While it’s been a tough season for them due to all the travelling and tight time lines, it’s also been quite a tough year for us fans – well at least us neutrals that aren’t Mercedes fans.

There is a slight anti climax to the end of the year due to the fact that both the Drivers and Constructors Championships were wrapped up quite a while ago. Mercedes and Lewis Hamilton in particular have been exceptional this year and while the end result was predictable (since the first couple of races); we can’t (nor should we) take anything away from what has been an outstanding year from them.

Anyway, there is one more race to go and while championships may have been wrapped up, lets enjoy this one last race, because I promise you that by January we will be hankering for more F1 action.

On paper, Abu Dhabi will be another track that should see Mercedes dominate. Which Mercedes is the question? 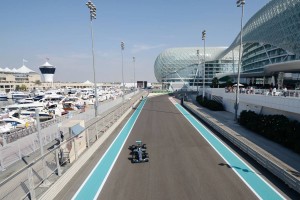 While Hamilton is a deserved 2015 Champion, Nico Rosberg has been on a roll lately. Two wins in a row along with five pole positions have shown that the German will be a factor next year. He has improved so much for this last home stretch of the season that I’m sure Hamilton will do his utmost to try and stop Rosberg’s momentum before the winter break arrives. Everyone knows it’s especially nice to go into the long winter as the winner of the last race.

One thing that came out of the last race was whether to allow the Mercedes drivers to race against each other – in that along with their respective engineers, they decide strategy. I get the team’s point of view that in fighting each other, it may allow a Ferrari to come and snatch a win away from them. However with both championships sewn up, I do wish they would just allow them at each other with the gloves off.

Now while I say Mercedes should dominate, that doesn’t mean Ferrari won’t be strong. We use the Soft and Super Soft compound of Pirelli tyre this weekend and all of their wins have come on that tyre combination. They will be closer, especially on race pace. Close enough to win, who knows, but it should be more of a battle between the two teams than we have seen over the last few races.

While the first three positions in the driver’s championship is done and dusted, the battle for forth will be very interesting to watch this weekend. A point separates Valtteri Bottas and Kimi Raikkonen and if they mess up (crash into each other again) then Felipe Massa could steal that position – although it’s a long shot as he is 19 points behind and would need to win.

The other interesting championship battle is in the constructor’s table with Lotus and Toro Rosso fighting over sixth place and with it a considerable amount of prize money. They are only separated by nine points and it’s hard to tell which way that battle will go.

One thing we can’t rely on is rain in Abu Dhabi, so if the action is going to be good, we will need it to be in real terms, so lets hope we get that this weekend.