The Brazilian GP held in the suburbs of Sau Paulo always offers up exciting racing. It’s historically been towards the end of the season, so we have seen many title deciders here, but obviously not this year as Lewis Hamilton has already wrapped up the title. 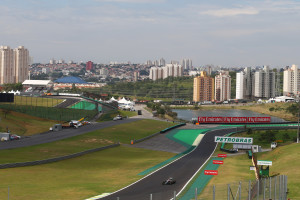 The charismatic Interlagos circuit is a counter clockwise track with some good elevation changes. The front straight is not really straight and comes up quite steeply from the last corner before heading down hill into turn 1. With the run from the last corner to the first corner being quite long and a DRS zone, you often see a lot of overtaking into turn 1. However the steep off camber nature of the braking zone means it can be quite tricky,

The rest of the track is made up of slow to medium corners (with turn 6 being the only fast one), which means you need a car with good mechanical grip and down force. It used to be a very bumpy track but with the surface being resurfaced last year, this is no longer the case.

While it’s a track Mercedes should have their usual advantage, quite a few people have ear marked this race to be one that Ferrari may be a bit closer than usual. If we get a hot race then it may even be one that they could win on merit. Tyre wear is expected to be a bit high as it is a track that puts high energy through the tyres. We should see two or three pit stop strategies during the race. 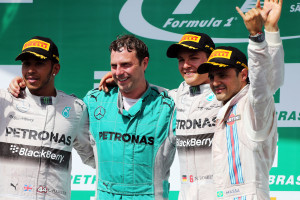 Red Bull are trying the new Renault engine this weekend with Daniel Ricciardo and while he will have to take a penalty, this does suggest a thawing with their relationship with their French power unit supplier. Getting a chance to run the new engine will help Renault with their development and with no other avenues available to them, it’s really in Red Bull’s interests to try and see if Renault will supply them for next year. Who would have thought that this could have happened a couple months ago – such was the friction between them? It really show’s how fast things can turn around in F1.

Honda is another engine supplier who will be pleased with how their latest upgrades have been helping, with Alonso even saying recently that it’s a shame the season is ending soon. After such a tough season you would think that it’s a strange thing to say but it’s a good indication that Mclaren Honda are finally making some progress.

Last year, Nico Rosberg dominated this race and due to the fact that he also was a clear winner at the previous race in Mexico, he will start as favourite this weekend for perhaps the first time this year. His teammate, Lewis Hamilton is also unwell, which may work in Rosberg’s favour.

Whatever the case, Interlagos usually throws up interesting races, especially if we get rain this weekend. If we get rain, then we usually get epic races.