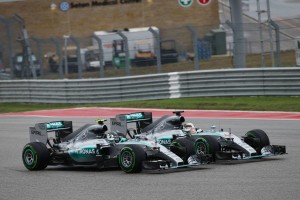 By now you would have heard that Lewis Hamilton is World Champion. He wrapped up his title with three more races to go in what can only be described as a dominant performance. He has had the best car on the grid but is still a deserved Champion. Last year, his teammate, Nico Rosberg made him work for the title, but this year, Hamilton was able to raise his game to another level to take the title quite convincingly.

Funnily enough, although Hamilton was able to win an action packed US GP on the weekend, I think it was one of his worse performances of the year. He was actually outraced by Rosberg and did not have the pace through out. I’d even go far enough to say that if he were in a different car, he would have struggled to finish in the points. He was gifted the win when his teammate made a surprising mistake coming out of turn 12 which put him off the track temporarily and Hamilton into the lead.

It was a tricky race with a wet track that took forever to dry out and it was in the transition stage from wet to dry that Hamilton struggled. He was not aggressive enough on cold slicks and had trouble getting down to the times Rosberg managed to straight after the first pit stop. This was very surprising to watch because Hamilton is normally very good though these kind of tricky conditions.

I can only describe his driving as “tight” and when you bear his comments before Sunday about “not taking any risks” it becomes clearer why. It’s a testament to him in a way that despite not having a great race, he still was able to take the win and get the job done. 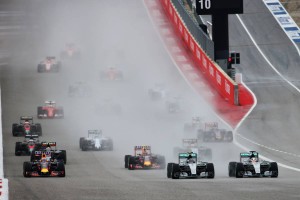 Rosberg on the other hand was livid after the race. I think in equal measure unhappy with his mistake that gifted Hamilton the win (and championship) and also because of what he felt was an over aggressive move by Hamilton at the first corner.

Rosberg despite starting on pole did not get away as well and the two teammates were neck and neck with Hamilton on the inside going into turn one. Hamilton then seemed to run out of steering lock as he then nudged Rosberg off the track that then caused him to lose several places.

In my opinion the move was a hard but fair move. Whenever you try to go around the outside you really need to try and have your car in front a bit of the other, otherwise you risk getting driven off as Rosberg was. It smacks of impatience a bit, and if he had yielded the corner he probably would have lost only one place instead of four. I think Rosberg was upset at losing the drag to the front corner and got a bit desperate just like he did in Japan – where he was run out in turn two by Hamilton.

Rosberg is aware that in racing conditions he has come off second best too many times to Hamilton and when you make mistakes like that you can see why. Funnily enough, later in the race Rosberg then made a great overtaking move on Hamilton and would have had many reasons to be proud if he had not just followed it up with going off the track to give Hamilton the win several laps later.

From zero, to hero and then back to zero all within one race. As my engineer used to say, “F1 is tough, other wise everyone would be doing it”.