Looks like normal service has been resumed over the weekend with Mercedes dominating the Japanese Grand Prix. Lewis Hamilton easily won from his teammate, Nico Rosberg in what largely, was a processional race. 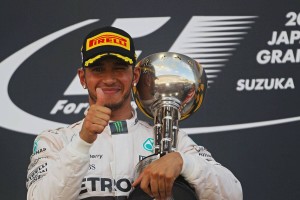 Hamilton had forced Rosberg off the track at turn 2 just after the start in a hard but fair move. This meant that he lost momentum and two more places.

Later after the race Mercedes confirmed that Rosberg’s engine was over heating slightly and did not manage to have quite the same power on the run to turn 1 as his teammate. No reasons where given other than that it’s up to the drivers to manage this on the warm up lap.

Effectively the contest was over at this point. It took two more pit stops before the German could get back up to second position and the Ferrari of Sebastian Vettel just did not have the legs to challenge either of the Silver Arrows.

This was a big blow for Rosberg, because by starting on pole and the clean side of the track, he had a perfect opportunity to try and close the gap to Hamilton in this year’s championship fight. Mentally, if he had won on Sunday it would have been a massive step for him, as it was, a distant second will have just piled on more pressure. With only five races left in the 2015 championship he is running out of races and ideas to try and turn his year around. 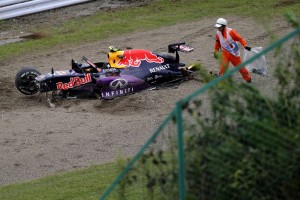 Further back, Red Bull had a shocker of a weekend with Kvyat starting from the pit lane after his qualifying shunt and Ricciardo suffering a puncture on the opening lap. This meant both Red Bulls were playing catch up after that and were unable to make it back into the points.

Their Sister team, Torro Rosso however, had a brilliant race. Both of their young rookies also had to make their way from the back and they did so with aplomb. Max Verstappen would finish ninth and Carlos Sainz Jr finished one place further back in tenth. These two drivers are quickly becoming my favourite driver pairing to watch.

On the Monday after the race most of the news was about Alonso and his disparaging comments about his engine during the race. It really seems that the frustrations of racing at the back all year are finally catching up with him.

We have to take note of what was said, because while it was heat of the battle stuff, Fernando Alonso does not say things without a reason. Now was this a hurry up message for Honda to sort their problems out or a message to Mclaren that he wanted to leave them and possibly Formula 1? I say leave F1 because if Alonso leaves Mclaren there just are not any competitive seats for him and so why would he stay?)

Hopefully for us F1 fans it was more of the former and not the latter, because he is still in his prime and it would be a huge loss for the sport to lose the Spaniard.