Pre-season is over – Who looked good, who didn’t

Pre-season testing took on more significance this year, than any other year. With the biggest technical changes ever to be seen in Formula One, it was crucial for teams to be out on track testing their new machinery before the start of the season in Melbourne, Australia. With only 12 days of testing available, the pressure was on and it wasn’t really surprising to see some teams and engine manufacturers slip up.

There were 4 days of testing in Jerez, before the circus moved to Bahrain for the remaining 8 days, split into two rounds of 4 days each. I was in Bahrain for the first 4 days and got insights into the new machinery. 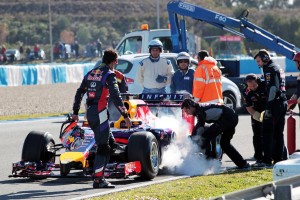 Every year we see some changes to the regulations but this year they have been quite extensive. We have brand new 1.6 litre, V6 turbo charged engines replacing the 2.4 litre V8’s from last year. Also, the Energy Recovery System (ERS) has twice the power of the KERS from last year. Hence, with the ERS playing a far bigger role in overall horsepower from the power train as a whole, getting it right would be very important. Efficiency would also be key this year with only 100kg of fuel available to each car to make it through the race. Bahrain was perfect for pre-season testing, it being one of the hardest tracks on the calendar for fuel consumption and it was inevitable that teams and drivers had to drive conservatively on the race simulation runs to make the required distance. Most drivers I spoke to liked this technical challenge and it will be fun to see who can make the most of the subtleties of the new format.

Aerodynamics for the last twenty years has been the over-riding factor in making a quick Formula One car, especially since 2007 when engine development was frozen in a bid to save costs. With the new power trains, an engine development war is about to break out again thereby putting the microscope on the manufacturers to get it right.

Out of the three engine manufacturers, Mercedes has been a class above the rest. They covered the most distance and all 4 teams running their engines looked quick. Williams and Mercedes-AMG Petronas looked the quickest on low fuel and also very handy in the race simulations. They should be right up there at the sharp end come Melbourne. Force India showed a good turn of speed too, but they looked to be about a three quarters of a second off the pace at the end. While Mclaren started the pre season tests strongly, by the end of the test, they seemed to be struggling a bit. By my estimations, they are looking to find about a second in pure pace over one lap. That’s presuming everyone was running fairly similar fuel loads during the low fuel runs.

Ferrari had a reasonable test as far as mileage was concerned but it seemed that they were also a wee bit off the pace, with some insiders estimating they being  up to a second off the times set by the Williams and Mercedes. Personally, I’m not quite sure where they are. There is a buzz in the paddock that there may be a bit more to come from them. 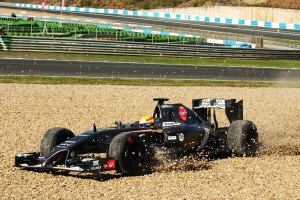 The other Ferrari runners struggled a bit with Sauber not quite on top of their brake by wire system. As for Marussia, they had pretty bad reliability issues and did not do anywhere enough running to feel confident going to Melbourne. However when they did run, the car didn’t look too bad and I think they have made steps forward pace wise to get closer to the midfield. However, there will be big question mark on whether they could finish the first few races due to the lack of testing mileage.

The big surprise of the Pre Season was of course Renault. They had cooling issues and to get their ERS to work reliably. Red Bull suffered the worse as their tight packaging meant they suffered from over heating more than other Renault runners. Their car looks quick but I’m not sure Renault can give them the performance they need to challenge at the front. And it may be this way for the first 4 fly away races.

Of the Renault runners, Caterham managed the most laps and I think they will feel quite confident they will be able to get to the chequered flag in Melbourne. And with all the teams having reliability issues of some sort, a finish may even net points.

Toro Rosso, had a miserable start to the pre season test but had a pretty good last two days. Not really sure where they will end up but they seem to have a handle on the Renault systems a bit better than their big sister, Red-Bull Racing.

And I think the wooden spoon for the pre season has to go to Lotus. They missed the Jerez test and it cost them dear. Even when they were in Bahrain, they still clocked the lowest mileage of any team. Making it to the chequered flag would be an amazing result for them in Melbourne.