The Sochi Autodrom was brand new last year as it held the first ever (modern era) Russian Grand Prix. It is a typical Hermann Tilke racetrack with immaculate facilities and lots of run off. While its not an outstanding track to drive it’s still challenging and technical. 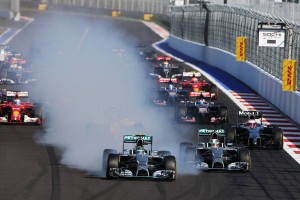 The race last year was not terribly exciting and the only thing that was a little strange for the teams to get their heads around was the tarmac. It was brand new and the teams found that there was very little tyre wear. Nico Rosberg stopped on lap two (due to locking up and damaging his front tyres on the opening lap) and was still able to do the 52 remaining laps on his medium tyre without stopping again.

You sometimes see that with brand new asphalt, but I’d be surprised if we see it again this year as the circuit will now have had a year’s weather on it. Also Pirelli are bringing the soft and super soft in the hope that we will see two or three stops this weekend.

Having said that this circuit will still be low wearing and there is another track that has similar surface and that is Singapore. This has Mercedes a little worried, even team boss Niki Lauda has expressed some concern about this. Could the combination of low wearing tarmac and regulated high tyre pressures combine to cause Mercedes the same problems this weekend as it did in Singapore?

Personally I rather doubt it because a team of this caliber should have figured out what went wrong for them in Singapore by now, although as a neutral fan it would be fun to see. The race around the Marina Bay was by far the most refreshing race of the year and wouldn’t it be fun to see a three way fight for the win again?

Sochi is still a power track and I think that Red Bull will suffer a bit here. I think it will be hard for them to fight for the podium and if they can be close to Williams here, that should be considered a success. For sure, as always, their two drivers will be pushing hard, especially hometown hero, Danii Kvyat.

However the real challenge to the reining champions Mercedes will come from Ferrari again. They have developed their car well of late and the Russian Grand Prix should suit them better than last time out in Japan.