I was fortunate that both my parents were racecar drivers, so it was relatively easy for me to get into the sport. I can remember my earliest memory was being at a race track when I was about three years old. The excitement I felt when I saw the cars line up to start the race will always stay with me. Right then was when I knew that this was what I wanted – the rush, the excitement, the competition.

I said “relatively easy” earlier, because motor racing is not an easy sport to get into due to the prohibitive costs involved. Again I was fortunate here, because my Father managed the Shah Alam circuit back then and with his knowledge we were slowly able to go race for the first time in 1992, get results and find sponsorship, which then allowed us to race some more

From success in the region where I won the Malaysian Formula Asia Championship that included a win in the first international single seater race in Zhuhai, China, I was then able to make my way to Europe. That’s when my education really began as the cut and thrust nature of racing with the best youngsters in the world, helped shape me as a driver.

That time was tough, especially as the financial crisis in Asia in the late nineties stalled my career. From there I moved to Japan to race, which was also an incredibly important step in my education. More importantly, it kept me racing in a time when sponsorship from Malaysia was an impossible dream.

My big break came half way into 2001 with a test with the Minardi F1 team at Mugello, Italy. I managed to impress and was offered a chance to drive for the team at the end of the year. I would do the last three races with a young Fernando Alonso as my teammate. That first race in Monza, Italy was very emotional and I distinctly remember the experience of pulling onto the grid to start that race as the first Malaysian in Formula one.

I managed one more year with the Minardi team in 2002 – where I had a best finish of 7th in Australia – before my F1 career was over. My results were simply not quite good enough to merit a longer shot in the category and while there are some regrets over choices made, I never regret the experience of what happened. The experiences there – good and bad – shaped me not just as a driver but also as an adult and I cannot stress enough how valuable they were.

A few tough years in the wilderness followed where I raced in America in Champ Cars to Australia in V8 Supercars. A1GP then happened and I was fortunate enough to be involved in the setting up and running of A1 Team Malaysia. In the three years that A1GP ran from 2006 to 2008, I was able to win four races and finish on the podium numerous times.

In those years I also did the 24 hours of Lemans twice where I won rookie of the year in the first year and finished 5th in the second. In 2006 I was awarded the Bruce Mclaren trophy from the British Racing Drivers Club for the best commonwealth driver of the year. 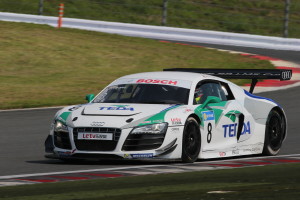 I did my first race for Audi in 2010, where we won the Zhuhai Intercontinental cup in an Audi R8 LMS.

2011 saw me do no racing but I did return to waterskiing (which I had done as a teenager) for the South East Asian games. I would go on to win a gold and two silvers and it was a very gratifying experience, as the results were not really expected.

2012 was when the Audi R8 LMS Cup was born and it’s really been a pleasure to race for Audi in that championship. The cars are so bullet proof and the organization spotless. I finished third in the first year despite missing two races. In 2013 I then finished as runner up despite a couple indecent crashes on my own. I was able to reward Audi for their faith by then winning the championship in 2014 with five wins.

It’s been a great ride and this year has started well. I’ve won the first race of the Audi R8 LMS Cup and now we go to Nurburgring to compete in the 24 hours in May. It’s an all-Asian line up and I can’t wait to compete there this year as it is considered the toughest race in the world.