In the later part of May this year, I got the chance to do the 24 hours of Nurburgring for the third time in my career. Let me just say that I love this race. When I say love, I really mean LOVE in upper case.

There may be bigger known races out there, like LeMans, Monaco or even the Indy 500, but from a pure driving challenge that combines the intensity of the track with the unpredictability of the road, nothing can touch the 24 hours, or as locals like to call it, “The Green Hell”. 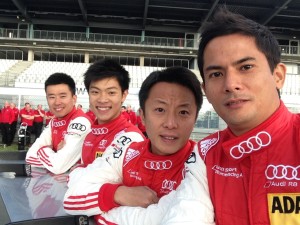 The Nurburgring is actually broken up into two parts – The Nordsheife (North Loop), which is the best bit: 20km of undulating stuff; and the South loop, which is where the modern Formula 1 circuit (5km) is placed and that bit is rather typical and boring.

It’s the last of the old fashion tracks that a car racer can ever drive, let alone race on. The massive 25km of undulating tarmac that weaves itself in and out of the Eifel Mountains in Germany is the longest closed circuit track I have ever raced on. As far as I know, only the Isle of Mann circuit in Britain is longer than the Green Hell and that only gets used once a year and it’s for bikes only.

So why is the Nurburgring so great? Well I can think of four reasons. Lets look at the first one, where it got its name from.

The track is surrounded by lush green vegetation – which obviously is why it gets its name – and this is due to the rain it receives so often there. What makes it so hellish is that the weather changes so quickly as it speeds over the mountains. It’s not unusual to see dry, wet, snow and even hail all on one lap, let alone over a race. So, a driver has to always be aware of what and where the weather is coming from.

I’ve been on dry slicks and come across pouring rain for a five kilometer section and then been told to stay out because even though five kilometers is usually a long stretch, it’s only one fifth of the total length of this track. I’ve then come around the next lap and had that same stretch become completely dry and that another section now has fog and rain. It’s really that crazy and for a rookie driver it can be very scary indeed.

The next reason, which makes it pretty unique, is the elevation changes. The Eau Rouge corner in Spa is rightly seen as the best corner in the world and this is due to its steep elevation change though a fast corner. However at the Nurburgring there are five sections that can rival Eau Rouge for the same stomach churning, ar*e h*le-tightening thrill. I’ll list them here, so please have a look at the video (playable below) and circuit map to see exactly where they are.

Flugplatz (Flying Place). In a GT3 car, the front tyres always lift up over the blind brow on the approach to it. It’s sometimes touch and go whether we actually will be able to regain contact with the ground in time before making the turn in of the corner. It’s where Manfred Winkelhock famously flipped his car in the early eighties and also where a spectator was tragically killed earlier in the year.

Fuchsrohre (Fox Hole). It’s taken flat out in sixth gear and dips a long way and so fast that your ears pop. This happens every lap.

Dreifach Rechts (Triple Right). It’s a long very fast right-hander with three apexes. Very fast because it is at such a steep angle down hill that your brain cries out to hit the brake instead of going for full throttle. 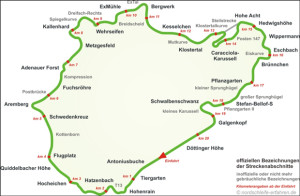 Wippermann. It’s a right, left, left, right sequence that is taken almost flat out in forth. It dips up and down like a roller coaster and personally it was the hardest part for me to get right on account of it all being blind.

Pflantzgarten (Plants Garden). All four wheels leave the ground before you have to turn right in forth gear. Great for photo’s, not so good for the heart.

Sprunghugel (Jump Hill). Again you get airbourne here, but at a much faster flat out in fifth left hander. Once you land it’s straight into the Bellof S, which is a chicane that is still taken flat out but in 6th. Get it wrong here and it’s the mother of all shunts.

Which brings us to the next part of why it’s so great.

In a GT3 car we will hit over 250kph seven times a lap. Twice on the Formula 1 track, which is no biggie as the road is wide, with lots of run off area. Here are the other five places we hit this speed.

Firstly is at Schwedenkreuz which is a big deal because it dips and rises so much through that bit you can’t see the end of the straight. You also have to pick a line through this “straight” that is not optimum for minimum track distance but because if you don’t you will have all four wheels off the ground. Which is not so fun at 250kph.

Next up is the Fuchsrohre. Wait a minute I hear you say, “Isn’t that a corner?” That’s right boys and girls you hit that speed on a flat out left hander which is at the bottom of a dip, so you will get full compression at this point and for good measure the car always squirms here. My bum always gets a bit squeaky here. Did I mention that there is no run off area here too? Definitely a crash of unbelievable levels if you go off at this one.

Kesselchen is the next part that is seriously fast. It’s a long up hill part that just winds up through the mountain. A couple of seriously fast corners that took me a long time to take with full throttle. But you must take flat out if you want to be quick.

‘Stefen Bellof S’ is another series of corners that you need to take flat out at over 250kph. It’s also blind. With no run off. With huge curbs. I always grip the steering wheel extra tight here.

Which brings us to Dottinger Hohe, which is the only real straight on the whole Nordsheife. It’s 2 kilometers long and we will top out at about 270-280kph here. The exciting part is breaking at the end of it at Tiergarten. It’s a long six corner chicane. You take the first part flat out and you get airborne (again), lift for the next part, then full throttle again, then brake like your life depends on it (which it does) due to there being no run off (again).

At the 24hours, it’s usual to get over 200 cars. This may seem like a lot (and it is), but when you consider it’s spread over a 25km track, it kinda makes sense. What makes it so insane is that some of these cars can be up to a minute and a half slower per lap, which means if you’re in a GT3 car, you’re in for a lot of overtaking.

The constant overtaking of slower traffic then results in the sensation that you are driving along a highway instead of a racetrack. It’s the only time I’ve ever experienced this in my motor racing career, whereas its pretty usual if you have ever driven in down town KL.

To add to this is that there are no safety cars at this race. If there is an accident, you will see yellow flags and cones around it, just like a highway accident. It’s not unusual to see tow trucks or fire vehicles at the scene of the accident around a blind bend. As for spilt oil? It’s there constantly and we often feel it before we see it. This has resulted in multi car pile-ups before.

Fortunately for us this year, we managed to stay clear of all this and finish a credible 12th.  Especially when you consider that it was the first time for my co drivers, Marchy Lee, Franky Cheng and Shaun Tong. Oh and the car as usual ran faultlessly.

The blind corners, the vertical G, the speed, the cars, the traffic, and the obstacles all add to make this a truly unique race that I love. One that scares the crap out of me but one I’ll never resist the chance to try again.

Please check out the map to see which parts I refer to in this article and also the video of one lap of the Nurburgring. It’s from the opening stint in the 24hours and I chose it because it was a clear (ish) lap of traffic.

You may notice the speeds don’t match what I’ve described in the article so far. That’s because due to the tragic accident earlier in the year, the race organizers on safety grounds decided to put in yellow flag zones in a couple of spots to slow us down.

Safety is an important consideration and for all the reasons I’ve mentioned before, it’s why a GT3 car is the fastest vehicle they will allow at this race.