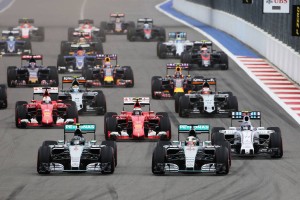 While the first Russian GP in 2014 was a bit of a snooze fest, this year’s Russian GP was the exact opposite with some good scraps all through the race right up until the last lap.

Perhaps not at the front, where Lewis Hamilton raced to a relatively easy win after his teammate Nico Rosberg retired. The Mercedes package was just too strong again this weekend.

However further back we had a hum-dinger in the first half between Bottas, Raikkonen and Vettel. Eventually Vettel would make his way past both drivers to finish second. He was relatively lonely in the second half of the race because of the scrap behind him.

That scrap involved Sergio Perez who stopped early, which allowed him to jump Bottas and Raikkonen. This then meant he had very used tyres at the end and both the Williams and Ferrari driver were all over Perez over the final quarter of the race. 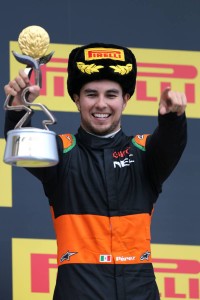 I really thought that Perez wouldn’t have made it for so long but he does make tyres last better than anyone else. However with a couple laps to go, I suddenly thought, “maybe he can do this”. Then all of a sudden you had both Bottas and Raikkonen mug him on the penultimate lap. Bottas firstly in an opportunistic move and Raikkonen followed him through.

After that the writing was on the wall that more drama was going to happen on the last lap and it did. Raikkonen in the slightly faster Ferrari made a last ditch move down the inside at turn 4. He came from too far back and the result was Bottas was punted into a spin and out of the race. Kimi was too blame in my view and although he was able to recover to finish in fifth behind Perez and Massa, he was given a 30 second penalty after the race which dropped him down to eight.

He lost control while braking for turn 13. He kissed the inside barrier, breaking his front suspension and after that he was effectively a passenger as his car then went into the barriers nose first. What was so horrible about the accident was that the car went under the safety barriers and had a 46g impact with the armco. 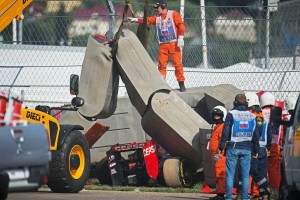 He was a lucky boy and my biggest concern was why had the car gone under the safety barrier and not through it? I haven’t heard anything about the barrier being improperly secured so I can only imagine that it happened due to the low noses of a current F1 car.

Now F1 changed to the low noses a couple of years ago to stop car flying in the air ala Mark Webber in Valencia. While that may have restricted those kind of accidents there are other things to think of such as submerging behind a race car or in the case of Sainz, under barriers. And when you submerge like that you also make the driver’s head more open to an unwanted and deadly contact.

Personally I think the noses are too low now. Why can’t we raise them ever so slightly? Say in line with the wheel line, instead of below or in the case of 2013, above it the wheel line. As my friend and colleague Gary Anderson pointed out in the press, why not raise it to the same level as the rear crash structure?